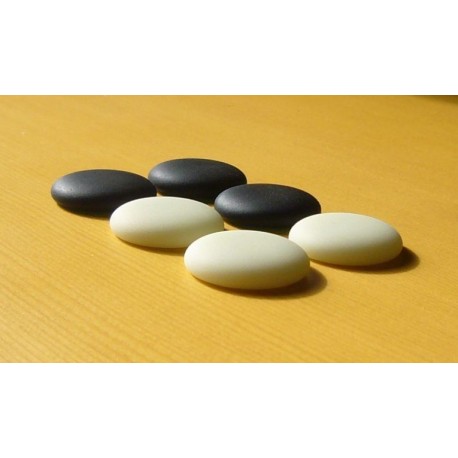 Yellow and convex Chinese-style Yunzi go stones (one convex side and one plane).

Yellow and convex Chinese-style Yunzi go stones (one convex side and one plane). These top quality stones are used in official Asian tournaments. Dense, thick, and very pleasant when playing with their velvety feel, they are considered to be the go stones par excellence.

The yellow atypical color of these stones offers the best possible visual result: the soft pale yellow and depth of the black stones allows an unprecedented reading of the game for the pleasure of the eyes.

In addition to offering crisp contrast on the board and improving the vision of the developing game, it is possible to put the stones in the mouth to study the variants or alternatives of positioning the stones, as is done in Chinese schools, without losing the initial configuration of the game.

According to history, yunzi stones, manufactured in China's Yunnan Province, were used by professional, school players and were regarded as precious gifts at the time of Tang Dynasty. The process of making these stones remains secret. According to rumour, Yunzi stones result from a combination of agate and rocks from the Yunnan Mountains.

These stones are suitable for boards with a Chinese grid such as the bamboo board.