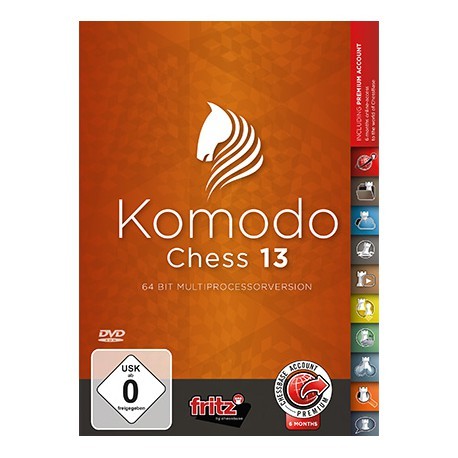 Komodo 13 analyzes better than any other chess program. The development of the MCTS technology has paid off especially in combination with "multi-variation mode": In standard computers that have multiple CPUs, Komodo 13 MCTS is the world's best engine for analysing with two or more variations. In addition, Komodo 13 takes on a very human character. In balanced positions, where other engines evaluate as "0.00", Komodo looks more closely: The engine gives preference to the side that has the easier game, for instance, when the opponent must find a whole series of difficult moves to remain equal.
Komodo is a three-time computer world chess champion. Whether classical, rapid or blitz chess, in 2018 Komodo 12 won the Computer Chess World Championships in Stockholm, Sweden in all three disciplines. And Komodo 13 MCTS has significantly improved on multi-CPU systems!
Komodo 13: match winner and analysis partner. As with its predecessor, Komodo 13 comes with two versions of the engine: The standard version continues to be the first choice in the match play against other chess programs. The "MCTS" version, now improved by 350 Elo points compared to Komodo 12, is recommended for everyone interested in discovering variations and detecting mistakes together with Komodo 13.
GM Boris Avrukh: "I am deeply moved by the style of Komodo. In my opinion it's the perfect combination between computer accuracy and human positional understanding. I get the feeling it's taken positional understanding to the next level. After such an impressive performance I am going to test Komodo in my future work, especially in very positional play, and am really looking forward to working with it."
Included on the DVD:
Improved Komodo 13 multi-processor engine (64 Bit + 32 Bit)
Fritz 16 program interface
New Komodo 13 MCTS engine
6 months ChessBase Premium Account
Minimum: Dual Core, 2 GB RAM, Windows 7 or 8.1, DirectX11, graphics card with 256 MB RAM, DVD-ROM drive, Windows Media Player 9 and Internet access.
Recommended: Intel i5 PC (Quadcore), 4GB RAM, Windows 10, DirectX10, graphics card with 512MB RAM or more, 100mb sound card% compatible with DirectX11, Windows Media Player 11, DVD-ROM drive and Internet access.
System requirements for The ChessBase Account: Internet access, updated browser (e.g. Chrome, Safari...) for Windows, OS X, iOS, Android, Linux.