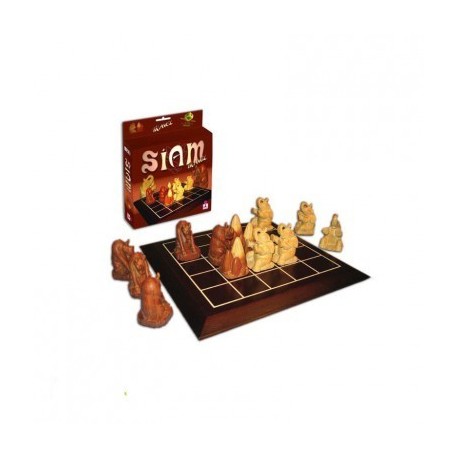 Siam, the Game. Strategy board game. Ferti. It's the travel version of this classic of games at 2.

Siam, the Game. It's the travel version of this classic of games at 2.

In the rules of the game Siam it is established that there was a kingdom where the Elephants and Rhinos lived in peace for centuries. But, after an earthquake like never before seen, the land was divided into 3 regions surrounded by huge mountains. Giant animals will now have to fight to see who stays with the kingdom.

To win in the Siam game, participants (each with tokens corresponding to Elephants or Rhinos) must remove the mountains and animals from the other team off the board. In the latter case, before you try, you must make sure that you exceed it in number (example: two Elephants can push a Rhinoceros)

In short, the siam game is quite simple in its rules but that doesn't mean it ends up being boring as it involves using strategies to outperform the opponent on duty.

A wooden board, 5 Elephants, 5 Rhinos, 3 mountains, 5 pieces of felt to stick under the board and the rules of the game.